4 Reasons Why Halon is So Valuable

25 Feb 4 Reasons Why Halon is So Valuable 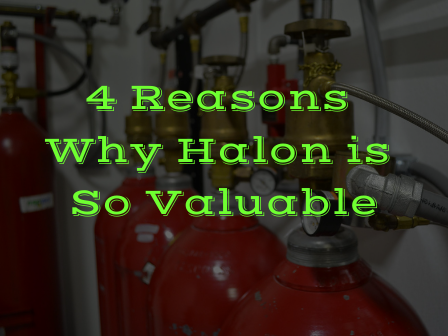 Following are 4 reasons why halon is so valuable:

1. It’s the Most Effective Form of Fire Suppression
Halon is the most effective fire suppression form yet developed. Most fire suppression systems eliminate either one element of a fire (oxygen, fuel, or ignition source), but Halon goes further to break the chain reaction of fire, stopping oxygen, ignition, and the fuel by chemically reacting with them.

Since Halon is such an effective fire extinguishing material, it is commonly used in vital areas of military applications, including tanks, aircraft, and ships. It is also found in communications and computer rooms in the electronics industry. Some people use Halon fire extinguishers for personal use, in their RVs, boats, cars, homes, etc.

2. It’s Safe Around Humans
Halon can be used in occupied spaces because it is generally safe around humans. Halon suppression systems became very popular because Halon is a chemically stable, low-toxicity compound that does not damage valuable assets, sensitive documents, and equipment. It leaves no residue and is safe for brief human exposure. Because of these characteristics, it is ideal to be used in closed spaces.

3. It is Perfect for Fire Suppression in Aviation
Halon is an efficient fire extinguishing agent. You can achieve your fire protection goals with a minimal amount of it. This means it does not add much weight when it’s installed in an aircraft. And as mentioned above, it is safe to use in closed spaces which means there is no danger to people. So, in terms of safety, fuel consumption, as well as the economic perspective, Halon is ideal for fire suppression in aviation. This is the reason why it has been widely used over the last several decades on board aircrafts for fire extinguishing purposes.

As you can see, there are many reasons why Halon is so valuable as a fire extinguishing agent. While its production was banned due to its ozone-depleting properties, the use of Halon is not prohibited. Over the years, it’s use has been reducing, but there is still demand for it for certain applications.