3 Ways That Halon Can Be Dangerous

25 Sep 3 Ways That Halon Can Be Dangerous 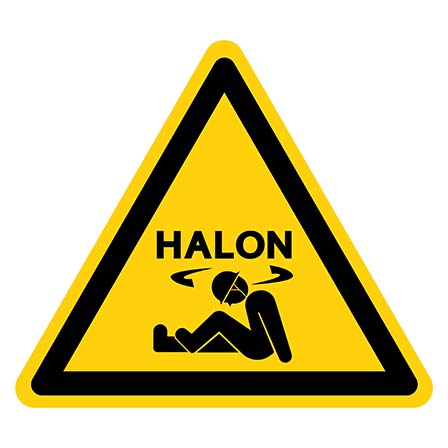 For many years, Halon was considered to be the best fire suppressant especially for high-value assets that couldn’t rely on traditional sprinkler systems. Halon succeeded so well because it could be used in a variety of sectors e.g. surgical suites, libraries, museums, IT rooms, data centers, and other locations where use of water-based suppressants wasn’t feasible. But, it’s production was banned in 1994 because of its ozone depleting properties. There are a number of ways that Halon can be dangerous to both people and environment. Following are 3 such ways:

1. Depletion of the Ozone Layer

Ozone layer is a thin layer of naturally occurring, invisible gas that is critical to all life on earth because it protects us from the harmful rays of the sun. Halon is dangerous in a way that it depletes the stratospheric ozone layer and does it on a relatively massive scale.

There are a number of factors that determine a compound’s ability to destroy ozone, including the amount of bromine and/or chlorine that it contains. To make the comparison easier, scientists have developed a relative scale known as the Ozone Depletion Potential. Common refrigerants, such as those found in automobile air conditioners and refrigerators, have been assigned the value 1 as a reference. Halon has a value between 10 and 16, which means it is much more dangerous to the ozone layer. This is the primary reason why its production was banned.

2. Prolonged Exposure to Halon Can Be Toxic

The toxicity of the Halon gases makes them dangerous to use in confined spaces. If it is to be used in such scenarios, precaution is required to minimize any inhalation of Halon. Avoiding all unnecessary exposure to Halon is considered good practice. This is because exposures to concentrations of 7% for more than 15 minutes can be very dangerous. The risk is minor when exposed to Halon in the 5-7% range as no noticeable effect can occur. However, at levels between 7% to 10%, the likelihood of toxicity increases significantly. That’s why, in places where Halon is still used and needed to be used, it is highly recommended that operators evacuate the space before proceeding.

There are a number of health risks associated with the use of Halon extinguishing agents. These include the following:

• Frostbite: Skin that comes in contact with the liquid of Halon can cause frostbite and chilled skin issues.
• Suffocation: High concentrations of Halon can cause people to suffocate. This is because it can create an oxygen-deficient environment.
• Eye and Skin Irritation: Since Halon is toxic, it can cause damage to skin and eye. Irritation can occur even if there is no direct contact with Halon.
• Cardiac Sensitization: Halon can cause an increased heart rate and irregular heartbeats in response to adrenaline. It can even cause a heart attack in extreme cases.
• Interruption of the Central Nervous System: Inhalation of high concentrations of Halon can interfere with the proper functionality of central nervous system. In such cases, symptoms of tingling sensation and dizziness is expected. A victim can even go unconscious in some cases.

Most of the health hazards listed above occur when exposed to Halon 1211. However, they can also occur in case of Halon 1301.