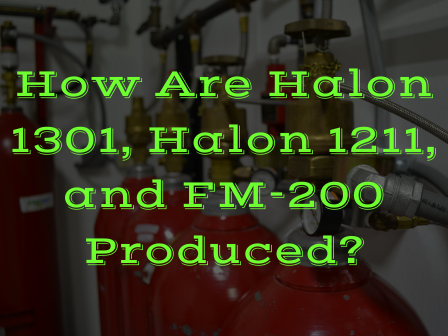 Halon is a popular chemical compound that has been widely used for firefighting purposes in the past. Halon hit the market in the 1960s and quickly became the most popular firefighting agent. It found widespread application in the protection of process control rooms, art and historical collections, telecommunication switches, processing rooms, etc. Two forms of Halon were very popular at that time i.e. Halon 1301 and Halon 1211. Halon 1301 was used in flooding systems for explosive and fire containment while Halon 1211 was used mainly in portable fire extinguishing systems in Western Europe and the Western Hemisphere.

However, production of Halon was ceased considering its ozone depleting properties. Eventually, a few viable alternatives were introduced. FM-200 is one such agent that quickly gained popularity as a suitable and safe alternative to Halon. Read on to learn how these popular fire extinguishing agents are made and how they differ from each other.

How is FM-200 Produced?
The exact method of manufacturing FM-200 is not disclosed, but its chemical properties are well-known. The chemical formula of FM-200 is C3HF7. The FM represents the chemical called Heptafluoropropane which is a colorless and odorless gas. The FM-200 fire suppression system is made up of elements such as hydrogen, fluorine, and carbon. Heat absorption is the primary mechanism through which this agent gets rid of fire. It is considered as the halocarbon agent which is safe even when used in the presence of people.

For storage, FM-200 is liquified under pressure. This compound of carbon, hydrogen, and fluorine is electrically non-conductive. The fire suppression agent used in FM-200 fire extinguishers is an acceptable replacement for Halon because it has no ozone depleting potential.

Conclusion
In conclusion, while the exact manufacturing process for all these fire extinguishing agents is not disclosed, their chemical properties show how different they are from each other. Halon is a greenhouse gas which depletes the atmospheric ozone. Because of this, its production was banned in accordance with the Montreal Protocol. However, if you still have a Halon suppression system, you are allowed to continue to use it. Most service contractors can recharge the system using recycled Halon.